Save Indian Rhinoceros – A Report 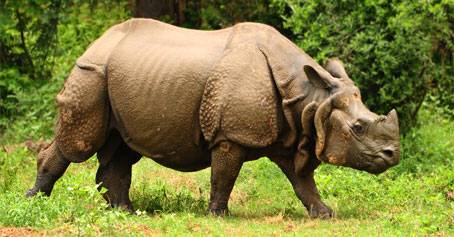 Indian rhinoceros is one of the seriously endangered species of animals in the world today. With a population of not more that 2600, they are fighting a hard battle to escape extinction.

Found only in the Northern part of India and in Nepal, the Indian rhinoceros is a single-horned beast who has been exposed to poachers (hunters) for their horns. The horn was in great demand mostly for making medicines due to which this species had come very close to a point of extinction.

An adult rhino weighs around 2000 kilograms. However, its horn starts growing only when it is six years. Although the Indian rhinoceros is a giant beast, it can run at the speed of 50 km/hour. Besides, it has a keen sense of smell and can very clearly hear sounds from a far distance. They eat grass, leaves, plants, fruits and they prefer to graze in the mornings and late evenings.

Extinction has claimed a number of animals, reptiles and birds from the face of the earth because human beings are too reckless (careless). We should not watch the Indian rhinos go the dreadful way of extinction any more. Thanks to the efforts of International Rhino Foundation, Indian rhinoceros have just missed a near extinction. As per reports, the number of rhinos is slowly picking up. As students, let’s spread awareness among our friends and in the society.

Get the best viral stories straight into your inbox!

What do you think?

Sorry. No data so far.

Back to Top
Close Create

Thanks for unblocking adblocker on your browser.

Hey Friend!
Before You Go…

Get the best viral stories straight into your inbox before everyone else!

Don’t miss out on new posts!